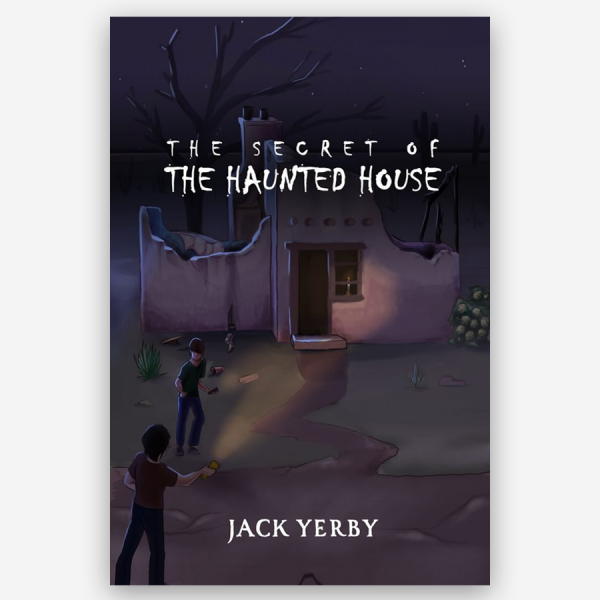 The Secret of the Haunted House

There’s a mysterious light in the old, burned down house across the road. Could it be the ghost of old lady Hampton? Or maybe the firefighter who died trying to save her?  And why is Mrs. Tsosie so afraid to get close to the property? Kenny doesn’t believe in ghosts, but when strange footprints are discovered in the neighborhood, he and his brother search the old ruins for clues. Kenny knows he is getting close to unraveling the mystery when he discovers firsthand just how dangerous crime solving can be!

Buy on BN.com and Nook Version

My grandson goes to school in Albuquerque and is 14 years old.  He was so enthused with your book, I picked it up at about 8pm last night and couldn't put it down until I had finished it at almost midnight.  What memories your book brought back!  When I was about 10 years old, 69 years ago, I was a huge fan of The Hardy Boys, Frank and Joe.  Kenny and James reminded me of them.  Mike, Katie, their angry, overwhelmed mother, the old Navajo woman, Mrs Tsosie, and Deputy Foutz all seemed very real to me.  Great job Jack!  The story was very compelling, and the "red herrings" you threw in there really added to The Secret of  the Haunted House.  Your book is not just for preteens and teenagers though, us old grandpas can enjoy it also!

Author Jack Yerby concocts an intriguing mystery for young readers that includes a burned-out haunted house with possibilities of hidden treasure to lure a contentious group of siblings to seek answers. Set in the American Southwest, this well plotted narrative shows the young family members learning to cooperate in their efforts until they are rewarded in finding a solution to the mystery.

This book is exciting and cleverly strategized.  The story represents present-day a family with children raised by one parent, living in a modest community. The youngest brother of three, James has observation skills, curiosity, imagination and almost a conviction that a ghost exists in the neighboring burned, abandoned house. His brother Kenny, a computer freak, displays investigative nature, in evaluating footprints and poems. It is all guess work, perhaps the ghost of Old Lady Hampton or the fireman or the neighbor, Mrs. Tsosie’s cultural belief, the Skinwalker is creating that nightly light.

Yearnings of James and Kenny to check out the “ghost” led them to involve other siblings, Mike, and Katie into unplanned predicaments.  Each episode ends in strong reprimands by their mother. The humor in family squabbles is sprinkled throughout the novel. The siblings’ pranks on each other have their mother threatening to trade her boys off.

As a Navajo reader, I especially appreciate the author’s inclusion of the neighbor, Mrs. Tsosie. She is an essential character who has lived the history of the location, thus a bystander and witness of what has happened to the Hampton house.

The author exhibits in Mrs. Tsosie’s communication the blended Native American speech derived from mingling her first language with the second. In Mrs. Tsosie’s cultural beliefs maybe a Skinwalker, Navajo witch with the ability to disguise themselves as an animal, is the culprit.

The strange and hazardous disease Hantavirus that was once prevalent on Navajoland appears in the story. Mrs. Tsosie’s experience and deep knowledge handily showed the boys how to destroy the spread of the deadly respiratory disease.

It is an excellent, thrilling read for young people, and anyone who enjoys suspense happening in the Four Corners Area.

As it's name implies, this book is a mystery set in New Mexico.  The story line revolves around a single mother of four children, ranging in age from 11 to 17.  While the children are on summer break from school, their mother still has to work.  Since the four adolescents are alone during the day, they (like many children), do things that their mother has told them not to do.  They are fascinated by the fire-damaged house across the street.  Mrs. Hampton (the owner of the house) died in the fire shortly after her son Mark returned with a friend, Darrell Bradford.  Mark and Darrell robbed a jewelry store of diamonds.  Mark was killed by several law enforcement officers and Darrell was sentenced to 30 years in prison. The plot thickens as the adolescents learn more about the house and the "secrets" that it holds.

Although other age groups would enjoy this book, it was written primarily for children ages 8 to 16.  The book certainly held the interest of the reviewer.  I highly recommend it.

Only logged in customers who have purchased this product may leave a review.