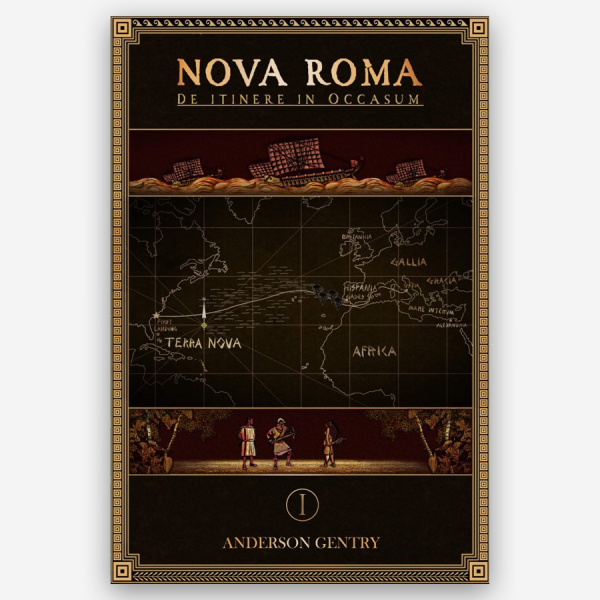 Julius Caesar has crossed the Rubicon with his army.  In Rome, the Optimate Senators, representing the cream of the Roman nobility, decide to flee before Caesar’s forces.  They plan to go to Greece to raise an army and challenge the ascendancy of Caesar.

At the last moment, their leader, General Gnaeus Pompey Magnus, demands a change of plans.  The Optimates will go not to Greece but to Spain, where Pompey has gold, property, and men.  The Senators and four legions of Roman troops set sail to Spain.

Fate has other plans. A freak storm blows the Roman ships helplessly to sea. They are propelled past Gibraltar, away from Spain, and across a vast ocean that no Roman has ever imagined crossing.  The storm leaves the battered Roman fleet within sight of a strange shore: the edge of a vast land of forests, mountains, and strange people.

“It is excitingly narrated and demonstrates an expertise in military tactics on the part of the author which will add to the appeal of the novel for readers who share his fascination with the subject.

We will not give away the ending, which we found not just satisfying but moving. Suffice it to say that that the resolution of the problem of how an advanced civilization can come to terms with a less developed nation to the satisfaction of both is typically Roman – and a model for our time.”
–Read the full review from Jillian Becker at the Atheist Conservative

Be the first to review “Nova Roma: De Itinere in Occasum” Cancel reply