Julius Caesar has crossed the Rubicon with his army.  In Rome, the Optimate Senators, representing the cream of the Roman nobility, plan to flee before Caesar’s forces.  The Optimates plan to go to Greece, there to raise an army and challenge the ascendancy of Caesar.

At the last moment, the leader of the Optimates, General Gnaeus Pompey Magnus, demands a change of plans.  The Optimates will go not to Greece but to Spain, where Pompey has gold, property and men.  The Senators and four legions of Roman troops take ship to Spain.

Fate has other plans, as a freak storm blows the Roman ships helplessly to sea, past Gibraltar, away from Spain, across a vast ocean that no Roman has ever imagined crossing.  The storm finally blows out, leaving the battered Roman fleet within sight of a strange shore, the edge of a vast land of forests, mountains, and strange people.

Lost in this new world, the Roman Senators decide to start the Roman Republic anew.  But the inhabitants of the new land of Terra Nova, led by a savage warlord, are organizing to resist the Roman incursion.  Until that conflict is decided, the fate of the new Republic hangs by a thread. 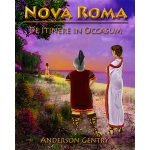 Previous project Little Astro Has Arrived!Next project Can You Read This? -Readability Guideline for Children’s Books